Here in our own Vancouver, we are lucky to have French films being brought in by  Visions Ouest Productions, Régis Painchaud and Lorraine Fortin, for the 23rd Rendez-Vous French Film Festival. Around 50 films (including shorts) from Québec and around the world will be presented, most with English subtitles, between February 1-12th.

First of all, however… END_OF_DOCUMENT_TOKEN_TO_BE_REPLACED

One week and 2 days ago I successfully completed my summer/fall road trip of Vancouver to Prince Edward Island and back. Sorry for leaving you dangling about my arrival. (if anyone is still reading!) I’m safe. 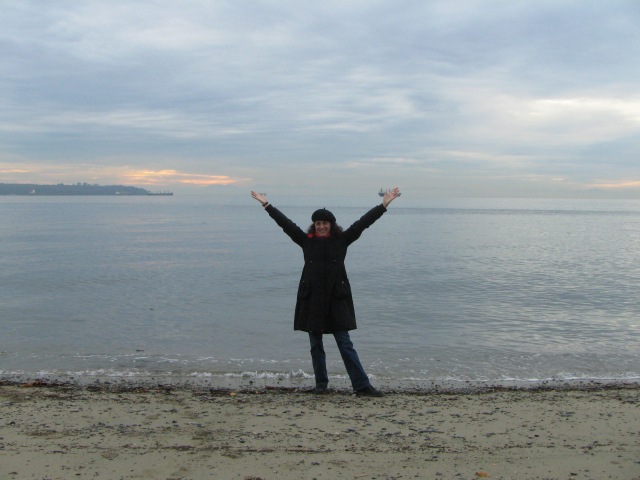 I was lucky. Tres lucky as snow and cold temperatures were on my heels but… END_OF_DOCUMENT_TOKEN_TO_BE_REPLACED

It’s been wayyyyyy too long since I’ve written here. Apologies, although, with all the information overload in the world, you probably didn’t notice, and if one of you did, you’re probably grateful for one less blog post to read.

THAT being said… “I’m baaaaack.”

I am boldly launching onto another adventure. Driving from the Pacific Coast to the Atlantic Coast, by myself. The route I have chosen will permit me to see a lot of my wonderful Canadian friends so I won’t be “bored”.

END_OF_DOCUMENT_TOKEN_TO_BE_REPLACED

I’m surprised Martin Dockery didn’t burst into flames after his fiery performance of Bursting Into Flames. I know, probably too obvious. But… there. I said it. Fiery. This actor, writer, poet is a tour de force. From what force he comes, I know not what. The second Dockery arrives on stage, you should have your seat belt already buckled up because the ride has launched. You’ll be tossed around, if not.

We start off in heaven where… END_OF_DOCUMENT_TOKEN_TO_BE_REPLACED

Today, I chose to walk to a meeting in my neighbourhood. Well.. the meeting didn’t happen but it gave me another chance to admire spring, observe new plants, buds, and blossoms poking up everywhere.

I recalled my first winter (early spring) in Vancouver when we wandered around in awe at the cherry blossoms in FEBRUARY!! Our move had been delayed as we had been completely buried in a huge snowstorm. Cherry blossoms seemed so unreal… but heavenly.

They still are 19 years later.

However,  Mother Nature can be mysterious and I love checking her out, seeing what signs, and guidance she can give me. As I was passing a tree today (I have had this thought prior) I marveled at the blossoms exploding from it…without leaves. The blossoms weren’t waiting for any slowpoke leaves to get their spring springing! They were going for it, and nothing was going to stop them.

Hmm… I thought that was a really good example of not waiting for everything to be perfect. That’s it… that’s all I want to say.

On April 1st, 2011 downtown Vancouver, a big black limo stopped outside the Vancouver Library. Out came some very mysterious characters called bouffons. They roamed curiously, and discovered the area, and the humans present.

They were quiet for awhile, and then..

…they danced. And, then they invited the humans to dance, too.

On that drizzly day in Vancouver there was a big bright spot of colour, and some very big grins. My goal as the leader of this wacky project was to bring unexpected, un-distracted joy to anyone near. Life can be challenging and sometimes we just need to let go, be our bouffons, and dance.

The result ended up on a wonderful video by Michael Julian Berz, and many more grins were made because of it. For that I’m grateful.

One of the video viewers wrote this poem. Actor, Energy Practioner, (and bouffon), Tom Tassé permitted me to share it with you.

To the Buffoonery Queen of  Hearts – Princes and Princesses

with waves of laughter

your souls speak with

In your back pocket

hearts of the unsuspected

the wand of magic from each of

tonight we sleep with

Thank you, Tom…. my objective is met. If you haven’t enjoyed the video yet….. have a peek and dare to NOT smile!

Last week I attended the gallery opening, “New Culture” the works of Nicholas Galanin. Having spoken to Craig Sibley, Trench Gallery owner, prior, I knew something unique was awaiting.

My purpose here is not to critique the work but to give you a taste so you will want to explore the work yourself. There are surprises. Some are disturbing, others, whimsical and impressive.

This exhibition is emerging Trench Gallery’s fourth, and builds on its mission to “present challenging, meaningful, tactile work created with a deep understanding of contemporary art practice”. My hope is that you might get curious enough to meander down to Gastown, where the gallery resides, and witness a creative mix of the traditional and the contemporary.

“I work with concepts, the medium follows. In the business of this “Indian Art World” I have become impatient with the institutional prescription and it’s monolithic attempt to define culture as it unfolds. Native American Art will not be commonly defined as our work moves freely through time. The viewer, collector, or curator’s definition often conveys more about themselves than that of the “Native Artist”.”

“In the past I have struggled with this title, though, now I embrace my position as a contemporary indigenous artist with belief that some forms of resistance often carry equal amounts of persistence. My current collection of work presents visual experiences in hope of inspiring creative dialogue with the viewer. I work with an intention to contribute towards contemporary cultural development. Through education and creative risk taking I hope to progress cultural awareness.”

This is Trench Gallery’s fourth exhibition, and if they are all as exciting as this, I will be in full attendance!

A Previous Exhibit at the Trench Gallery

Another fun moment this summer was seeing “Kooza” by the Cirque de Soleil. Having met clown, Ron Campbell on twitter, and then offline in L.A. last year, I was excited to see him performing live in the big tent in Vancouver.

If any of you have seen Cirque de Soleil, you understand that you need to buckle up and get ready for a big ride, and Kooza didn’t let us down!

Yes…we spent a lot of time holding our breaths as the physical performers took their lives into their hands with height, spinning cages, wobbly chairs, and thin wires. The whole show was a smorgasbord of pliable bodies folding in unexpected shapes, hoola-hooping beyond imagination, leaping, flipping, climbing, balancing, stacking, dancing, cycling, and impressing us the audience who, by contrast, were frozen immobile in our seats.

All acts were supported sensitively by beautiful live music made up of two voluptuous voices, and an orchestra of talented musicians.

Afterward, we were fortunate to go behind the scenes, meet a few of the performers, view some of the specially constructed equipment (done by the performers), and hear some stories. (thank you Ron!)

Cirque de Soleil has managed to harness an incredible amount of talent from the performers and creators, to all the behind the scene professionals (riggers, stage designers, costumers, lighting designers) into a spectacular ensemble that takes you on a journey of fantasy and awe.

A true entertainment escape! Have you ever experienced it?

(oh.. and here is a Cirque video, by Chris Wheeler, we happened to pop into that night!)

Bien sur, most events are en Francais, but art is an international language, and these events can be enjoyed by all.

In fact, on opening night, this past Saturday a gang of …well, not exactly humans, was present and spiced things up while people enjoyed hors d’oeuvres and their pre-show socializing.

Yes… Madame Rouge (me) & her Bouffons came out to play with audience members, and with some of the other performers of the evening. (This gang loves “enhancing” special events…)

As well as creating unexpected havoc (in the funnest way possible), les bouffons held space for circus performers, Benoit Ranger and Catherine Joly of “Les Transporteurs de Reves” as they displayed an amazing routine of strength and beauty. (Us Bouffons decided they were our esteemed cousins)

This upcoming week I (not Madame Rouge) will be enjoying more of L’ÉTHÉÂTRE with a performance by ‘Le Duo Alcaz’ on Wednesday evening (July 14) at 8pm. I hope many will come and support this great new festival by Vision Ouest Productions!

(and who knows when those crazy bouffons will re-appear.. muhahaha)

The Olympics are over, and there is a quieter feeling in Vancouver.

The red hockey shirts, hats, mitts, scarves, weird hats, costumes, shoes, maple leaves, and flags have retired to closets. The spontaneous “woohoos!” have abated. And, I admit, I miss those crazy connections with strangers, and the upbeat energy.

Something emotional and spirited took place in Vancouver during the 2010 Olympics, pleasantly catching a few of us off guard.

However, with the Paralympics are around the corner,  hopefully, some of that enthusiasm will  re-ignite along with the flame!

I had a secret pleasure in observing the freedom that occurred with many individuals, and noted that a lot of people allowed their “bouffon” to emerge and take life a wee less seriously. It was like the Olympics gave permission for people to express themselves, release, and play.

And, that’s what I did too. Play. I indulged in my “Canadian-ness” and got caught up in our patriotic rouge. I became the Hockey Fan I was supposed to have been when I first won my Tourism BC twitter prize. I yelled  “Louuu…” every time Roberto Luongo saved a goal, and jumped up & down screaming when Sidney Crosby saved the day. (what was happening to me?).

I had pictures taken with  Canadiana as if I were a tourist in my own town.

My heart beat hard watching Joannie Rochette skate her Golden Bronze performance, I leaped off the couch as we witnessed the unexpected Gold medal snowboarding by Jasey-Jay Anderson, and the close Golden win of the men’s speed skating minutes later.

(My own Olympic moment was when I was zipped across a wire over Robson Square downtown Vancouver!! Whew!)

Watching the athletes inspired me to “go for Gold” in my art. As all the athletes were striving for their best performances, my cast in “The Memory of Water” at the Deep Cove Shaw Theatre were also enjoying sinking deeper and deeper into their work, giving audiences memorable experiences.

Just before our opening, I told myself, as I was directing,  to “Go through the finish line, not up to it..” It feels good to know that’s exactly what we all did!

Did the Olympics affect you in a surprising way, and are you going to embrace the Paralympics? (Personally, I think they already deserve medals for just being an athlete who has had to overcome incredible obstacles before mastering their sport.)