When you look up to the sky and see a shooting star, what is your reaction? One of elation? Of excitement? Thrill – because you have the privilege of a pending wish coming true?

Or… knife cutting terror because you think a new war has started?

Two evenings ago, sitting in a dark theatre, watching “One”, my perspective on that mysteriously beautiful strike of moving light so high in the sky altered.

Orange Noyée’s first creation ONE currently at The Cultch presented by the PuSh International Performing Arts Festival takes us on a journey from Iran to various areas in Canada and a brief return to Iran.  And inwardly to the struggle of a man who wonders from where he really is.

Mani Soleymanlou brings his one man show co-directed by Alice Ronford from Montreal, but his first roots were established as a young boy in Iran. From there his family fled the oppressive atmosphere to Paris, France, then to Toronto, Canada “the cousin to the American dream”, then to Ottawa “uhhhh”, and finally Montreal, land of poutine and potential. 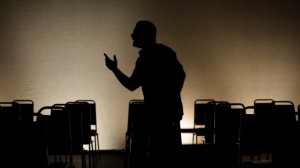 ONE is Mani’s story as he juggles with his identity. He wants to embrace and own his Persian culture but realizes he lacks a deeper knowledge. He knows recipes. He knows some rituals. He knows teas.

Research brings Mani to a realization that he is not truly Persian. He doesn’t know the day to day burden of adhering to rules that go against human nature. His life in Canada cannot compare to the strict bonds of the culture in Iran.

But, in my mind, his disturbing reaction as a young kid seeing his first shooting star on his Grandpa’s porch secures his natural empathy to his current fellow Iranians.  Mani IS Persian as we see his passionate desires to express, to change, to bring to life the culture from which he was created prove it.

ONE gave me a deeper sense and understanding of my Vancouver Iranian neighbours, of friends, and a refreshed appreciation my unclothed view of the world. We are given well timed pauses for thought during the show.

As heavy as this subject is, Mani Soleymanlou delivers his story with breath giving humour. For this, I thank him.

I am also grateful to both the PuSh Festival and The Cultch for encouraging new works, and bringing them to Vancouver.